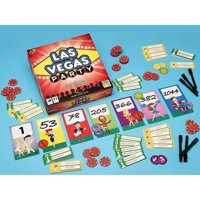 In the trick-taking game Crazy Lab, the players are mad scientists mixing colorful liquids to make explosive mixtures. Each card features a vial that contains several liquids – that is, colored and numbered suits – and players will collect these cards if they win the trick. Each player has a randomly-dealt public color that counts as negative points for him, and after checking his dealt cards each player chooses a secret hidden color for which he'll score positive points at game end. Finally, each player chooses two more colors that will be added to the trump deck. Each round, a card from the trump deck is revealed, then players sequentially play any card from their hand. Whoever plays the card with the highest trump color wins the trick. But beware! Since the vials contain liquids in several colors, even if the trump is blue, you could be getting a lot of red liquid! After all cards in hand have been played, the game ends, and whoever has the highest score wins.