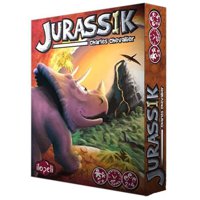 The best fighters in the world compete against one another in the grand Kung Fu Super Cup. Who will meet this challenge? Full of confidence in the power of dice, every player tries to collect exactly those symbols which are required to defeat pupils, masters and grand masters — but this can be done only with a bit of luck and a good memory.

Players in Würfel Kung Fu must challenge to a fight as many hidden Kung Fu fighters as possible by rolling the dice and putting down the right symbols. But victory points go only to the player who has also memorized under which card each player is hiding. The stronger a fighter is (student, master or grandmaster), the more winning points a player can score, but the harder it is to beat him. To come off as the winner of a fight, players also have to memorize which opponent is hiding under which card. The object of this game is to have the most points at the end.